An epic journey into the world of dinosaurs where an Apatosaurus named Arlo makes an unlikely human friend. 65 million years later, Apatosaurus farmers Henry and Ida have children Libby, Buck, and the runt Arlo, who has trouble adjusting to farm life. While his successful siblings are allowed to “make their mark” (a mud-print on the family’s corn silo), Arlo’s timid nature makes tasks difficult for him. Henry attempts to give Arlo a sense of purpose by putting him in charge of guarding their silo, and helps him set a trap. It captures a feral caveboy, but Arlo doesn’t have the heart to kill him, and sets him free. Disappointed, Henry takes Arlo to track the caveboy, leading them into a ravine. Henry saves Arlo from a flash flood before being swept away and killed. 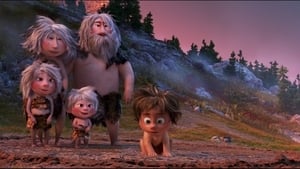